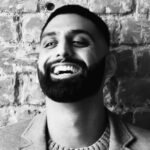 Vipul Bhesania, also known as v, is the host of the Know Your Legacy podcast, a writer and seeker of truth. He expresses emotions through words to reach people on a deeper level.

“Some write books to make money. Some write to look good. Others write because they must. The latter write from a deeper well.

They write because something dormant has been awakened. They write with a newfound awareness, of themselves and the world. They have crossed a threshold where the current of courage flows that little bit more fluently. They write beyond themselves. A place where making a difference becomes more important to them than looking good. They write from the vulnerable parts of themselves in the hope that their writing can help others do the same. They write with the burden of making an impact. They write as if they have to. As if their lives depend on it. Because the parts of their awakened self will die if they don’t express their truth into the world.

I met Vipul at an event in Las Vegas where I was speaking. I was standing in line to get a coffee and offered to buy one for a young man behind me. A total stranger who has since become a friend. Vegas must be one of the most disconnected places on earth. A place people go to disconnect from the world they inhabit. Like a good action movie where you can take a short break from your life.

So, how does a young man searching for himself in Vegas write a book of deeply vulnerable poetry? I have watched Vipul grow into himself and have been fortunate to play a small role in that journey myself. Vipul attended my BraveSoul experience on Ireland’s west coast a few years back. The one thing I remember deeply was his smile. It came from his soul. I do not want to attempt to credit my work alone with his transformation, but that smile was different when he arrived. It was dull. It was rehearsed. It was staged. It was expected. It felt heavy.

The only way I can describe the smile at the end of the week was watching someone’s face change as the person they love unconditionally walks across a beautiful park towards them. The moment you know it’s them for sure, and the soul bypasses the mind and overflows with the sheer unpolluted love you have for their beautiful soul. It looks like the deepest form of acceptance. It’s the smile that can only emerge when you have forgiven the person for their flaws and accepted the ones that won’t go away. It’s the kind of smile you see a mother give their newly born child. It’s the smile that emerges from the most compassionate part of you. That well of compassion that you often starve yourself of.

The person that Vipul met that week, was himself. His poetry will not introduce you to him, his philosophy, his mission, or his beliefs.

His poetry will allow you to meet yourself.”